This month's field event was a "Parks on the Air" (POTA) activation of the Johnson Ferry South Unit of the Chattahoochee River National Recreation Area (Park K-0662) .

If you're not familiar with POTA, ham radio operators set up in state and federal parks and operate in a fashion that provides emergency operation awareness and communications skills. But more than that, POTA provides a challenge to get on the air and make contacts. To encourage folks to do just that, there are a slew of awards, both for "activators" (hams who set up the stations in the parks) and the "hunters" (hams who make contact with them). Awards start with as few as 10 contacts, so everyone can jump in and start earning awards right away. On any given day, there are literally dozens of hams on the air, and "chasing" them is a ton of fun. During a recent activation, sitting along a river in Great Smoky Mountains National Park, Skip Kazmarek, K4EAK, our ARC VP, made 71 contacts in 80 minutes, often with half a dozen stations all calling at once! To get a sense of all of the POTA activities occurring at any given time, check out the POTA spotting page here: https://pota.app/#/. (There are 25 different POTA spots on that page as this page is being written)

We had 4 antennas set up and 2 radios. Everyone got a chance to operate and try to get an award from POTA for making 10 or more contacts. One ham actually had a QSO with a ham in Italy over CW and another talked to Colorado on SSB.

And, of course, we had food and drinks and general conversations and good times. Here's one comment:

What a great event! For starters, we had one new General-class ham show up with his brand new radio and we got it configured and set up, and then he proceeded to rack up a bunch of HF contacts, blasting way over the threshold to be a POTA activator! And then, among the other operators, we had voice, digital, and CW operations going all at the same time. Even stringing the antennas was fun, especially since the trees weren't the best attachment points and we had to use push up masts to supplement the setup. Add food, and drink, and great conversation, plus a bunch of deer wandering around. Great day. Keep your eye out for the next one. These are fun.
— Skip Kazmarek, K4EAK VP, Atlanta Radio Club 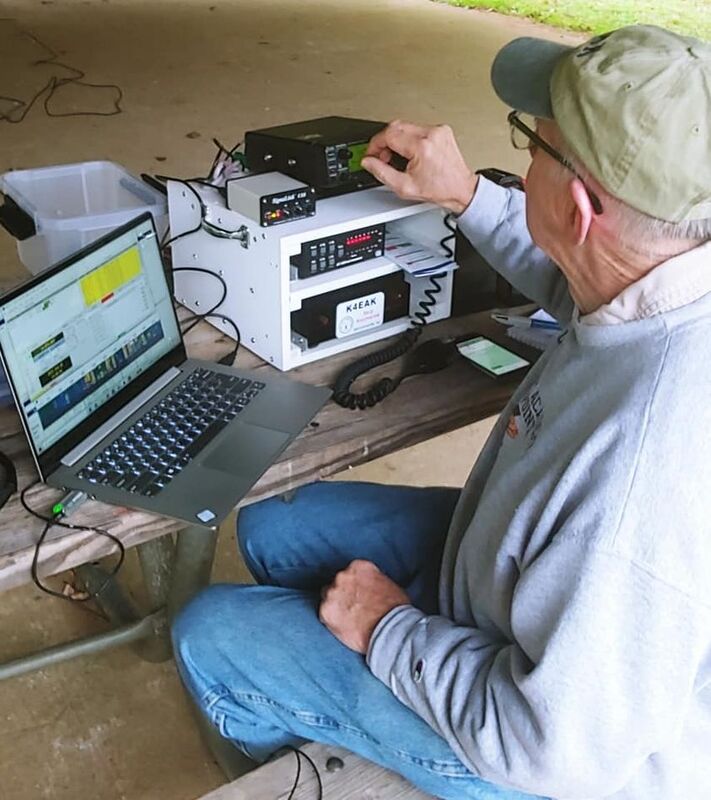